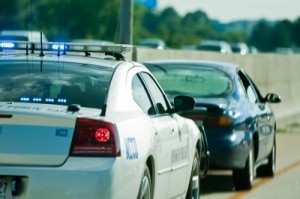 How do you feel when you know that someone is watching you? Notice your reaction next time a police car happens to be following you or driving alongside. Initially, I experience that strange phantom guilt that comes when we believe that we are completely innocent but anxious that some unknown fault will be detected. Then I try so hard to drive normally that I overcompensate and risk making mistakes because of my tension. Our walk before God does not need to be like that.

The Hebrew word meaning “before” (lipne) is used in similar ways to its English counterpart, but it has an interesting connection with the word panim, meaning “face.” To walk before God is to live aware of His watching face. Some people find that nerve-wracking, as though God is a cosmic police officer itching to switch on the pretty flashing lights, pull us over, and issue a citation. Certainly God acts as Lawgiver and Judge, but His relationship with us is much broader and sweeter than that. David urged Solomon to walk before God—the essence of spiritual maturity.

As David’s time to die drew near, he charged Solomon his son, saying, “I am going the way of all the earth. Be strong, therefore, and show yourself a man. Keep the charge of the Lord your God, to walk in His ways, to keep His statutes, His commandments, His ordinances, and His testimonies, according to what is written in the Law of Moses, that you may succeed in all that you do and wherever you turn, so that the Lord may carry out His promise which He spoke concerning me, saying, ‘If your sons are careful of their way, to walk before Me in truth with all their heart and with all their soul, you shall not lack a man on the throne of Israel.’” (1 Kings 2:1-4)

David’s imminent death signaled the time for Solomon to step into mature manhood. That included paying careful attention to the Law of God, not out of fear but in faith. The Law was part of a promise: if we live according to God’s ways, we will succeed. In Solomon’s case success extended beyond his reign; it consisted of an enduring kingdom that began before Solomon and pointed to the kingdom of God announced and revealed by Jesus. The most worthwhile successes in life outlast us.

David rephrased the conditions for success in terms of a wholehearted walk before God. Perhaps the words include a trace of a warning that God is watching and alert to our straying. However, Scripture tells us more about our Father who watches to encourage and support us in every step of faith that we take. Our Father loves it when we are more aware of His watching face than any other person’s, more concerned about pleasing Him. A walk before God is a life of looking into the face of God and knowing that He is looking back.

The goal of Bible Maturity is to promote spiritual growth and faith in God. Please share these short Bible devotions with your friends and family and pray for revival.