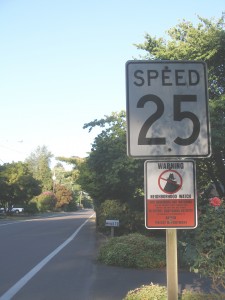 25 MPH is the hardest speed to drive at: too slow for third gear, too fast for second. I feel as though I am in danger of being passed by skateboards and bicycles. Everything in me wants to speed up. During transitions in our lives, when God is moving us into a new phase, it often feels as though we’re stuck in low gear, but there’s a reason.

God set a speed limit on the nation of Israel as they began their conquest of the Promised Land:

The Lord your God will clear away these nations before you little by little; you will not be able to put an end to them quickly, for the wild beasts would grow too numerous for you. (Deuteronomy 7:22)

God usually acts in partnership with His people. Of course, He could do everything alone, but He chooses to involve us, and our part takes time. When it comes to conquering new territory, expanding ministry influence, growing the church, or reaching the unreached, God wants sustained success. His people must have the character, strength, and competence to hold their gains and bear fruit through the seasons. The nation of Israel was too few in number to fend off ferocious animals by themselves. Their Canaanite enemies were allowed to linger in the land in order to keep the creatures at bay while the Israelites gradually multiplied and spread.

If you feel stuck in a speed zone, revving your engine to race on to the next milepost, consider what God wants to accomplish before He lets you loose. The context of the verse in Deuteronomy suggests some ways to pray for our own spiritual growth including our capacity for ministry:

Please make these daily reflections on a few Bible verses part of your daily devotions. Sign up and then respond to the confirmation message (we will not spam, or share your e-mail address).