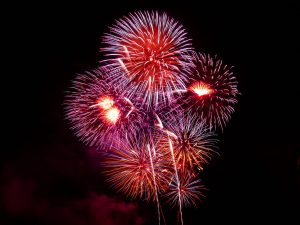 Kingdom Authority demonstrated with a firework display of miracles.
From https://www.publicdomainpictures.net/view-image.php?image=403

Matthew’s account of Jesus’ ministry immediately after the Sermon on the Mount reads like a firework display of miracles. The multitudes that had marveled at His authoritative teaching followed Him and saw the practical extent of that authority. Right there, at the foot of the mountain,

a leper came to Him and bowed down before Him, and said, “Lord, if You are willing, You can make me clean.” Jesus stretched out His hand and touched him, saying, “I am willing; be cleansed.” (Matthew 8:2-3)

Jesus’ words acted like a flame to a short fuse. Cleansed skin spread over the leper’s body like the sparks of an exploding rocket. Whoosh!

Leaving the leper to formalize his cure with a local priest, Jesus headed home to Capernaum. There a centurion implored Him to heal his paralyzed servant. The officer understood authority. He told Jesus that he did not need a home visit, “Just say the word.” Boom! Within the hour the servant was up again.

At Peter’s house Jesus touched the hand of His sickly hostess. Pow! She hopped out of bed healthy again, eager to serve snacks.

Caught in a sudden violent storm on a boat trip across Galilee, Jesus demonstrated bold faith by rebuking the winds and waves with dramatic effect.

On the eastern shore of Galilee Jesus and His disciples encountered violent demoniacs. A single word, “Begone!” was enough to dispatch the demons. Poooff!

Back in Capernaum, stretcher bearers delivered a paralytic to Him. Unlike the case of the centurion’s servant, Jesus injected a large dose of forgiveness to free nerves, joints, and bones from their immobility. Fizzz!

What were the fireworks for? They were part of celebrating the arrival of the kingdom of heaven on earth. The boundaries of darkness retreated as Jesus toured Galilee on those days. Each miracle lit up another dark corner of the heavenly places: leprosy, for so long untouchable, was vanquished; paralysis loosened; intimidating demons driven from their territory; the untamable forces of water and air conquered. Women and despised leaders of a foreign occupying force both became welcome beneficiaries of God’s merciful healing. Even sin, that had dragged its victim incapacitated onto his bed, loosed its hold at Jesus’ word. The kingdom of God breaks through all barriers.

For Jesus, miracles were part of everyday life. For us, the heirs of the kingdom, the challenge is to exercise our God-given kingdom authority and light fireworks whenever we have an opportunity.

The goal of Bible Maturity is to promote spiritual growth and faith in God. Please share these short Bible devotions with your friends and family and pray for revival.