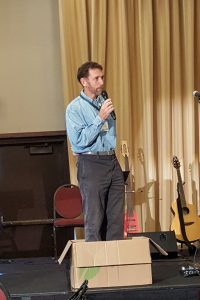 I like my box. It contains my life, defines who I am, gives me identity.

There is nothing fancy about it. It has some flaws, dents and scratches, but it feels cozy and secure inside.

It’s bigger than some of your boxes. And, yes, smaller than others (but we won’t talk about that).

I’m working hard to enhance it, expand it, make it more presentable and attractive.

However, lately, I have noticed that my life box is rather limiting. And no matter how good it is on the outside, it has dark corners into which I can sweep hidden failings and mistakes. Well, everyone has them—don’t they?

I have discovered that the box is surprisingly empty, too.

Jesus was frank about the limitations of the human identity box. “Apart from me you can do nothing.” (John 15:5)

I have reacted to His words in various ways over the years. Perhaps you have too. The easiest way is to shrug them off as though they have little significance. Then there are the paths of pride and shame. Pride thinks Jesus can be proved wrong, so I try harder. Shame curls into a fetal position in a corner of the box.

But Jesus wanted none of those responses. Jesus said His words about us while teaching how His followers can be fruitful by abiding in the vine. And He said almost the same thing about Himself: “The Son can do nothing of Himself, unless it is something He sees the Father doing.” (John 5:19) Jesus’ life was a lesson in fruit bearing, a model for us to follow.

Historically, God has tended to make mighty warriors for His kingdom out of plain, even weak, people. Very few Christian heroes excelled in natural gifting and charisma before they allowed Him to change them. He is looking for those who will simply admit their emptiness and invite Him to fill them.

Paul got it. He prayed that the boxes of our lives would be filled up to all the fullness of God (Eph. 3:20). That’s what we must pursue; the Spirit of God displacing the empty treasures of our self-made identities. An ordinary life filled to overflowing with the life of God will become an extraordinary life.

2 thoughts on “My Identity Box”